For you, what is the best dessert to start the season of fall? For me, it is definitely the French Apple Tart filled with a homemade apple sauce and topped with thin slices of apples. It is simple, light, flavorful, and elegant.

I brought this French Apple Tart to a Mom’s Night Out and got so many compliments about it. One slice was left and my husband was happy to eat it when I was back at home 🙂

The same day, I made this other French Apple Pie for a friend. He told me that it was so good that he fought with his two kids to save the last piece.

With this picture, I also want to show you that you can put the apples in another pattern, like a flower. Just overlap each slice of apple with each other all around the tart until you reach the center.

With the leftover dough, I made a little French Apple Tart. This picture shows you that you can make a tart without mold. Just roll the dough in a circle until you reach the size you want on parchment paper. Spoon the apple sauce over the dough, leaving a 1.5-inch border to fold the dough border over the filling to form a circle. 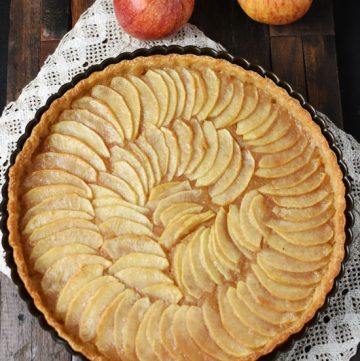 Keyword apple, French Rhubarb Apple Tart Recipe
Tried this recipe?Let us know how it was!