Last summer, I made this famous and traditional Key Lime Pie in which I used speculoos instead of graham crackers for the crust.

This year, I wanted to add my “French touch”. So I made a Key Lime Pie with Pie Crust (called “pâte brisée”) and used a bigger pan for a thinner filling.

My family and I really liked this version better because this type of crust and the thinner filling made the pie lighter. The crust was delicious, not too sweet, and balanced the sweetness of the topping. It also was easier to cut the pie.

I made just one mistake when I put my tart in the fridge. I covered the pie with some aluminum too close to the filling. So I messed up the top of the filling a little bit when I carefully tried to remove it 🙁 I did my best to hide it with some whipped cream. I learned my lesson! 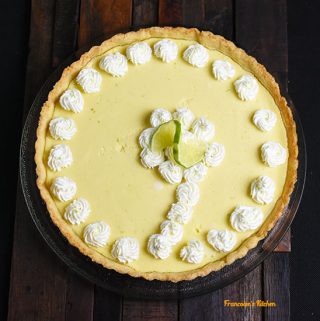 For the Pie Crust (Pâte Brisée):

For the whipped cream topping:

To make the crust:

To make the filling:

To make the whipped cream topping:

Keyword citrus, key lime, pie, tart
Tried this recipe?Let us know how it was!